By now some of you readers are made aware of Tony Nicklinson’s story: former rugby player, paralysed from the neck down, had his legal plea of assisted suicide denied, died due to starving himself and pneumonia (I think he did it intentionally). His last tweet:

‘Goodbye world the time has come, I had some fun.’

I’m totally against unnecessary suffering only when it comes to the physical, id est, terminal illnesses, complete paralysis, etc. Don’t get me wrong, if you want to live then fine but what about living and not being able to add quality to your life or the life of others? What if your existence is a burden to your loved one? At this point I would like to make myself clear: I do not support suicide killings/bombings, homicide-suicide, suicide due to depression and/or bullying, I’m totally against violence on any level. I support assisted suicide for the critically ill, brain dead or anything to that effect.

If I had a condition which is all about physical pain, constant trips to the doctor, making me dependent on others, I can’t do anything for myself, and it would kill me eventually but years from now (or I die naturally), feeling hopeless, depressed and useless, I would opt for a quick and pain-free death. Call me a coward but the joy in that kind of life is pretty much non-existent and for me, that’s not the way I want to live. 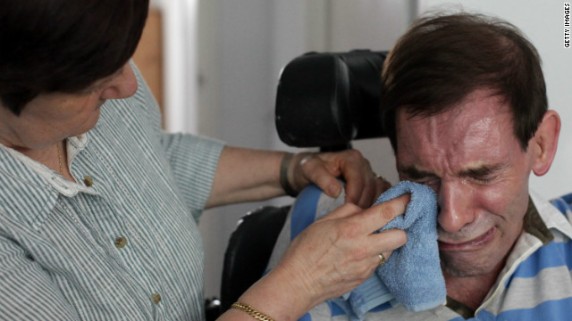 In the photograph above, Tony Nicklinson with his wife, Jane, when the judge denied his assisted suicide plea. Does this man looks happy to continue living like that? He can’t even wipe his own tears. To continue living life in paralysis is a death sentence for him. He’s not getting any younger, he’s probably concerned about his wife’s happiness…I could list a million reasons.

We all know a doctor’s job, decree and only function is to preserve life so this goes against many doctors’ belief, religiously speaking killing someone even your own self is a sin (the killer’s soul be damned for all eternity). However, ‘mercy killing’, ‘assisted suicide’ or euthanasia is not a ‘bad thing’ in all cultures. The English word ‘Euthanasia’ is derived from Greek words “eu” and “thanatos,” literally, “dying well.” Euthanasia is legal in the Netherlands, Belgium and Luxembourg and Assisted Suicide is legal in Switzerland and the US states of Montana, Washington and Oregon. Active Euthanasia is illegal in Mexico but not Passive Euthanasia (patient is terminally ill and unconscious can be refuse aid to prolong life by relatives). Colombia’s Constitutional Court ruled May 20, 2010 that “no person can be held criminally responsible for taking the life of a terminally ill patient who has given clear authorization to do so.” In Japan it’s a bit more complicated:

In the case of passive euthanasia, three conditions must be met:

For active euthanasia, four conditions must be met:

Whew! It’s not easy to decide on how and when to kill a person even if he/she is on death row and deserves it. I appreciate the concern and thought put into taking someone’s life especially if they are at a loss in physical health. But I believe that if a person, like Tony, who has reached that point where death is a more favourable option and chooses to do it legally in his/her sound mind, should not be denied the Right to Die.